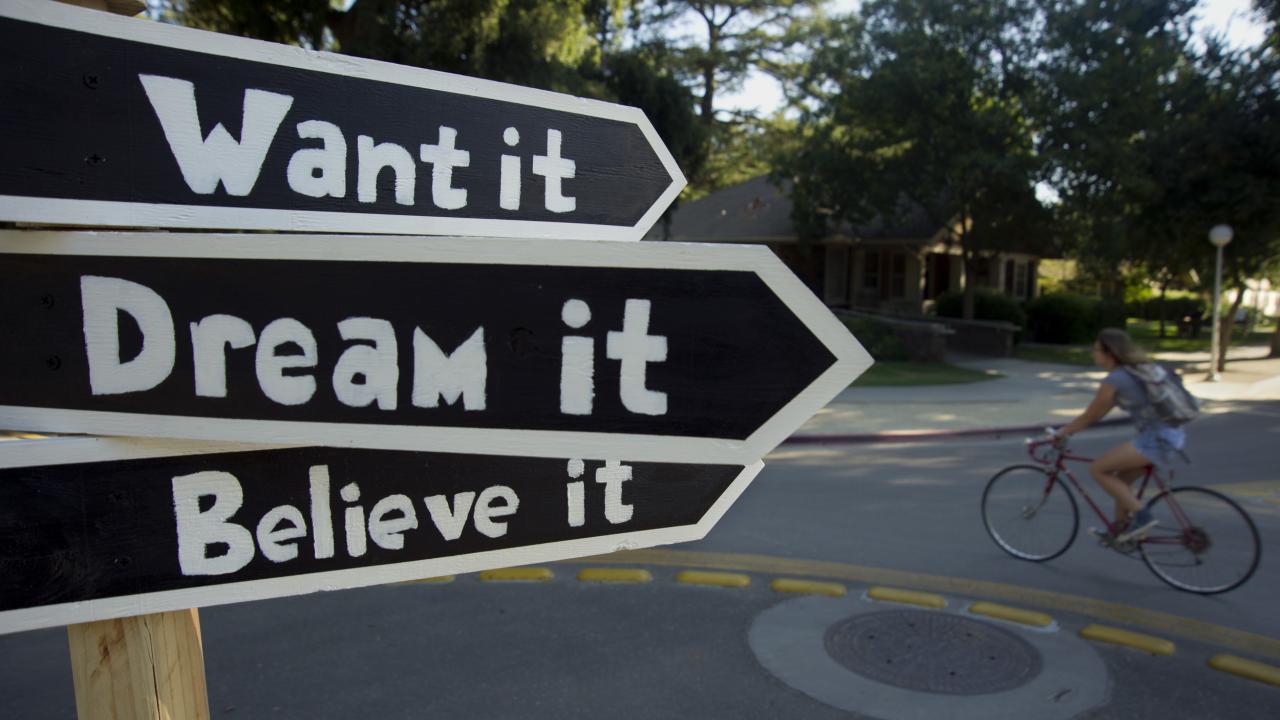 Good morning, everyone, and welcome to the 2016 UC Davis Fall Commencement ceremony!

Before anything else, please, everyone, join me in the first order of business: applauding the Class of 2016!

So, there is no confusion on this point, let me hasten to say that earning a degree from the University of California, Davis is a very big deal. It is a major life accomplishment that speaks volumes about our graduates’ ability and determination, and it is one they can be very proud of for the rest of their lives. I sincerely hope that, over the next several days or so, everyone will celebrate this milestone with just as much ability and determination. Graduates—today is your day!

I want also to extend a special welcome and acknowledgment to the families and friends of our graduates. Your happiness and pride today are palpable, and your presence is one of the many wonderful things about this ceremony. To all the families and friends, and the parents especially, this event would not be possible without the support and guidance you’ve given your student for so many years. Today is your day, too.

Please, everyone, join me in giving the families and friends in our audience a warm round of applause!

According to tradition, I now have the honor and privilege of sharing some reflections with the graduating class. So, from this point on, I will speak directly to the new graduates.

It isn’t until you begin to plan a commencement address that you feel—in addition to the excitement that always comes with this experience—the considerable burden it imposes to say something worth your attention, especially on a day like today. I felt that burden as I prepared the address I’m delivering now.

I would like to contribute to the celebratory mood of this ceremony by delivering remarks with a decidedly sunny disposition. But my recent brooding on current events, and the particular conditions of our historical moment, compel me to remind you that you go forth into a perilous world.

Please don’t think I am referring only, or even primarily, to the recent election—either its outcome or the remarkably acrimonious campaign process. It is not my place here to make a partisan argument of any kind, nor do I desire to make one. My real topic is something related, but also larger and deeper—the way we, as a society, respond to the major challenges that come our way.

Make no mistake. Our moderate California climate and beautiful campus notwithstanding, the perils of our world are very real. Some have been with us for a while. Nuclear war, for example—though arguably the danger of nuclear catastrophe is now even greater due to the breakdown of the non-proliferation regime and the possibility of bad actors getting their hands on nuclear material.

There are also newer dangers, equally frightening, like sea-level rise due to the melting of polar and land-based ice packs. The stakes are very high. They include the potential devastation of infrastructure on a massive scale. If this isn’t sobering enough, let me share with you a dinner conversation I recently had with a UC Davis geologist. He said that current models that project sea-level rise of a few feet by the end of the century could well be off by an alarmingly wide margin. The actual rise could in fact be tens of feet, and possibly happen more quickly than currently predicted. Davis’s elevation is, for point of reference, 54 feet above sea level.

At the risk of raising your alarm even higher, we should all remember that there are more physical perils yet to reveal themselves and also more to be born. Sometimes, cruelly, our very efforts to overcome threats give birth to new and sometimes more- severe ones. For example, one of the miracle tools we have used so successfully to combat infectious disease, antibiotics, can by their wide and often indiscriminate use help to create antibiotic-resistant strains. As a result, the original diseases become ever more difficult to control.

There are also dark clouds on the social front. Twenty-seven years after Francis Fukuyama published his book The End of History, today it is difficult to read without wincing his claim that, after the fall of the Berlin Wall, liberal democracy’s spread was unstoppable. How wrong he was! I will not cite all of the counter-evidence, but consider how liberal democracy is today under threat in the European Union, and how this threat may eventually lead to the EU’s breakup. At the same time, a resurgent Russia may bring about the resurrection of what members of my parents’ and my generation knew as the Warsaw Pact nations. Break out those old maps, everyone!

The urgent question for you as new graduates, and for all of us, is this one: How do we overcome these and other great perils? This is, as they say, a multi-part question requiring a host of answers. But let me focus on one answer that addresses a critical fact: one of the key challenges that the world’s perils present is an intellectual one. In order to conquer the threats we face, we first need to be able to clearly understand them and also identify the most-promising solutions. In other words, we need to be expert practitioners of what I will call “discernment.”

History does not end, but neither does it repeat in cycles, a simplistic notion that has been transmitted in widely separate cultural traditions since antiquity. Nor are any two apparently similar ideas interchangeable, whether we’re talking about rival plans to stop ice melt and sea- level rise, to fight an infectious disease, to grow economic prosperity, to shrink wealth inequality, to create jobs, to fight terrorism, or to promote international peace and cooperation. The devil, as they say, is in the details, and sometimes even a difference in degree amounts to a difference in kind.

Discernment is also the power to separate the wheat from the chaff. Falsehood, misinformation, and misleading statements have always circulated in every society and at every level of society. In turn, humans have often been fooled by them—with disadvantageous or even disastrous results. Thinking about our present historical moment, I can’t help but be reminded of the ancient poet Virgil’s depiction in the Aeneid of “winged rumor,” which spreads a false story with superhuman swiftness throughout Libya—thereby producing tragic consequences. Do we not see “winged rumor” today employing such tools as Twitter, Facebook, radio talk shows, and even news networks and newspapers? These innovations make our exercise of discernment especially necessary.

As this last example implies, at the heart of the power of discernment is skepticism. One must approach any and every proposition skeptically. This is the heroic shield, so to speak, that protects one from the onslaught of the false and misleading. Skepticism deserves a place in our intellectual pantheon for its godlike achievements, from antiquity to the present. Besides being the core belief of an ancient school of Western philosophy, it is the progenitor of the scientific method and, one might say, the godparent of the Enlightenment and thus all modernity.

We need to take a posture of skepticism even toward our most confidently held and venerable beliefs. For what we confidently know is never truly final. The necessary search for ever greater and more finely grained knowledge never ceases. All “certainties” ultimately prove to have been provisional or at least incomplete when we explore them more deeply, sometimes by making use of new investigative technologies. This applies to every area of exploration: an organism’s genome, a subatomic particle, the movement of the larvae of microscopic sea creatures, the ancient papyrus texts found in Pompeii and Herculaneum beneath Vesuvius’ volcanic ash—as well as our urgent global problems.

Discernment employs skepticism, but it also limits its exercise because it knows that, without limits, skepticism can corrode the entire enterprise of understanding in a world where no one can know everything firsthand. Yes, it is an important step in our cognitive development to realize that there are two sides to every argument; but it is essential to take a further step and understand that one side may be much more credible than the other. Things are rarely black and white; there are usually many shades of gray, and acknowledging that one is in a gray zone doesn’t mean that one shouldn’t strive to discern the differences in shading and come to at least a provisional clarity. Indeed, one must.
The same rule applies to the authorities we look to for guidance. It is critical to realize that even a respected authority may err. But that doesn’t mean that one should utterly reject that authority, or all similar authorities, or all authorities. Alas, being too ready to reject a source of information or ideas often means that one is simply crediting another source that conveniently supports one’s own position. Again, the skeptical but not-too- skeptical evaluation of both ideas and their sources is essential to discernment.

When I speak of discernment in these ways, it’s difficult not to think of that immensely beneficial human invention we call the university. Universities are unique among all social institutions in that their primary mission is the pursuit and dissemination, for the public good, of important knowledge and deep understanding about our world and ourselves. Universities are further unique in the formidable collection of intellectual resources that they direct toward major problems and grand intellectual challenges.

These are the elements that make universities truly special places—indispensable places—much more than a beautiful campus building or quad, or fond memories of good friends and good times—as important as these things are to us.

By this stepping-stone of the university, I turn my attention back to you, our guests of honor. Your status as graduates of UC Davis, and as representatives of the great idea of the university, places on your shoulders special responsibilities. These include being a conduit for discernment in the face of worldly perils and every other type of intellectual problem, acting in accord with core ethical values, and even serving as ambassadors for the great social good of higher education. If you’ve ever wondered exactly what the word “light” refers to in our university motto of Fiat Lux, or “Let there be light,” the responsibilities I’ve just mentioned are a big part of the answer. Your society and your university look to you to be bearers of that light.

The good news is that, thanks to the intellectual abilities and ethical awareness you’ve developed during your time at UC Davis—in the classrooms, laboratories, libraries, and countless other places across the campus—you are exceptionally well equipped to bear the light, and to make a positive difference. You’ve acquired the uncommon habits of unbiased truth seeking, critical thinking, deep and careful study, argumentation based on fact and reason, and civil and respectful dialogue with those who think differently.

What is more, you are guided in all of your intellectual endeavors by a basic literacy in other cultures and beliefs, as well as an internal compass that directs you toward justice, fairness, and the valuing of all human beings.

Henceforth, you will apply your skills, guided by a sense of responsibility to the general good, without consciously choosing to do so. You will do so because it has become natural to you.

This point goes to the heart of why we, who stand on the other side of your diplomas, are so proud of you, and why we are so optimistic about what you will contribute on whatever stage you determine is right for you.

Again, my congratulations to the Class of 2016, and best wishes for your future! Thank you.