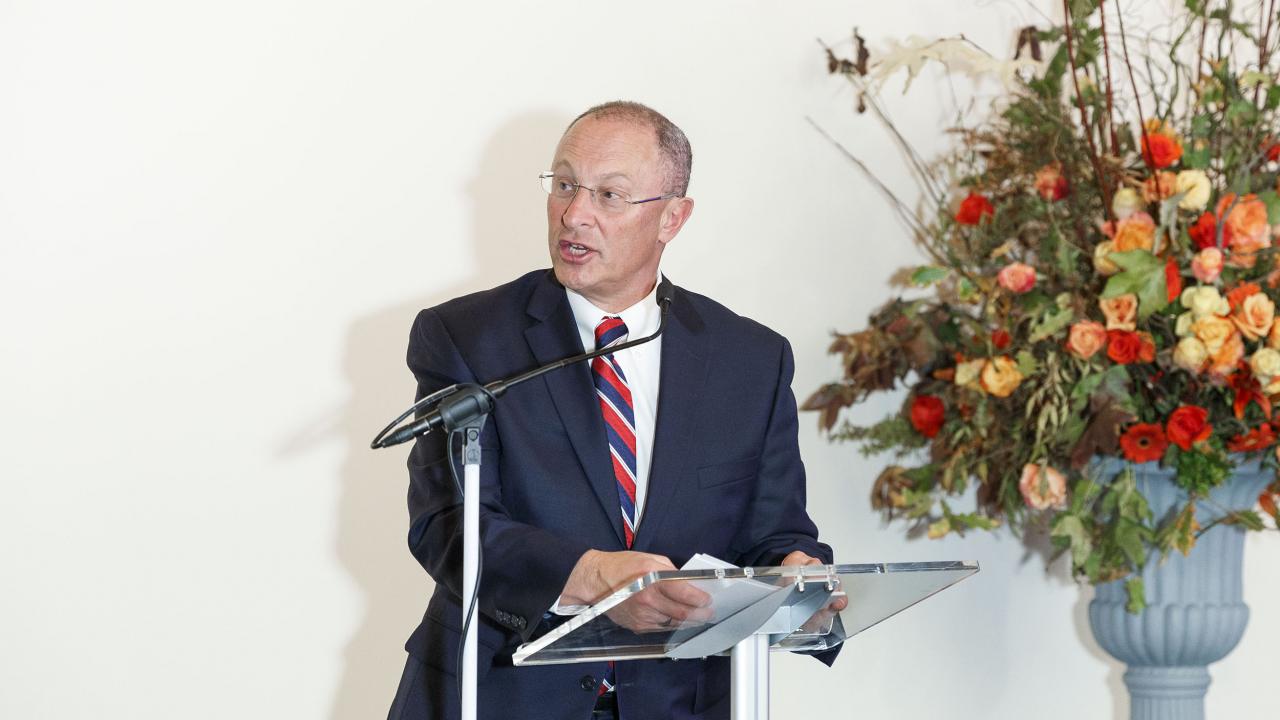 I’m delighted to welcome all of you, on behalf of the University of California, Davis, to our campus and to this conference.  We are privileged to include in our company, besides representatives of BARTA and members of our UC Davis community, many distinguished guests from California, the United States, and abroad.

Given the recent devastating hurricanes in the southeast and Puerto Rico, and the tragically destructive fires that have just stopped burning very much in our university’s backyard, it is an understatement to say that holding this conference on our campus this fall is timely.

As you may well know, teams from our School of Veterinary Medicine have been active these past two weeks tending to and rescuing animals in Napa and Sonoma.  Disasters such as these powerfully remind us how much is at stake in animal rescue and trauma care, as well as the great need for pursuing these tasks with the highest degree of professionalization and preparedness.

Some expressions of appreciation are in order.

First, I want to thank our partner in this conference, the British Animal Rescue and Trauma Care Association.  By providing advice, direction, training, and accreditation for those performing animal rescue and trauma care, BARTA is making a much-needed contribution to promoting the highest level of expertise and the best practices in both of these areas.

Next, I want to thank our UC Davis School of Veterinary Medicine, the host of this conference.  This joint effort with BARTA is only the latest example of our Vet School’s commitment to being on the cutting-edge of animal healthcare and to building mutually beneficial relationships locally, nationally, and globally.

Finally, I want to thank everyone in this room—from BARTA, UC Davis, other institutions and organizations, and the general public—for being here.  Your participation is part of the process of advancing the widespread efficacy, professionalization, and humane disposition of animal rescue and trauma care.

I have been allotted just a few minutes at the podium to welcome you and make a few pertinent comments.  Even so, I can’t resist beginning anecdotally and confessing that, upon first hearing of the idea of this conference some time ago, I was momentarily tripped up by the name of an organization with which, I have to admit, I was not yet familiar: “The British Animal Rescue and Trauma Care Association.” We’ve already heard of some transatlantic translation challenges––lorry, car park—and I began my morning reading of explanations for Americans of the British phrase “daft twerp.”

Of course, as Provost of a truly international university, I share my institution’s enthusiasm for international engagement and its benevolent attitude toward all members of our global community.  In addition, I believe that I harbor no smoldering resentment about a long-ago, nearly forgotten quarrel in which the United States and Britain found themselves on opposing sides.

But as I pondered the name “British Animal Rescue and Trauma Care Association,” I found myself wondering: What is so special about British animals?  What makes them more worthy of rescue and care than, say, American animals?

As often happens with thorny questions of philosophy and language, it turned out that I was inadvertently opening a Pandora’s box of knotty questions.  Beginning in a practical vein, I further wondered: Was this association dedicated to serving all animals now or once residing in the UK, or only those holding British citizenship?

In truth, I am somewhat embarrassed to admit in this august company that I posed this question.  For only a few seconds of further thought made me realize that these weren’t the only possibilities.  Perhaps being British—in the eyes of this still-mysterious professional association—was not a technical matter at all, but rather one of possessing a distinctive attitude or spirit—presumably including that unflappable pluckiness and determination for which the British are famous.  That seemed eminently possible, given what I’d gleaned from my reading of Tennyson’s “The Charge of the Light Brigade” many years back in college, when I was, indeed, an English major.

But this line of reasoning proved no more satisfying.  Was I to believe that anyone could reliably detect the presence or absence of the British spirit among all of the world’s animals, which I understand to be exceedingly numerous?  Granted, the Old English Sheepdog and English Bulldog are easy calls.  And I imagine that the red foxes living in England, Wales, and Scotland have in recent years become more enthusiastic about their futures under British law.  But beyond such obvious cases, how could anybody be sure that a given animal possessed or lacked the requisite spirit?

Because the time allotted me to speak is brief, I will report only one more pothole, or ditch, in my intellectual car trip—the moment I realized that there was yet another plausible grammatical reading of BARTA’s name.  The British Animal Rescue and Trauma Care Association might well be dedicated to supporting British animals who themselves act as rescuers and trauma care providers.

If, indeed, I had this thought—which, for the sake of these remarks, I am claiming I had—I can hardly be blamed.  For my generation, and perhaps others, domestic British animals were somewhat mythical creatures in ways not irrelevant to the concerns of this conference.  Think only of Anna Sewell’s Black Beauty!

Our American outlook was influenced more than a little by a weekly television program and movies about a Rough Collie named Lassie whose occupation seemed to be collaborating with humans to rescue boys trapped in wells or perform similar heroic feats.

Our understanding was further shaped by what is perhaps still the quintessential film in the British animal rescue genre, one that represented domestic animals as both rescuers and rescued.  I am referring, of course, to Walt Disney’s 1961 animated feature One Hundred and One Dalmatians.

Where else can we find such a memorable tale of British animals—including Colonel, an old sheepdog; Captain, a gray horse; and Sergeant Tibbs, a tabby cat—closely collaborating to rescue other British animals?  In the script that is, I’m sure, familiar to all of you, Colonel, Captain, and Sergeant execute what is effectively a crack military operation to save 101 puppies from becoming a fur coat, thus foiling one Cruella de Vil.

I approach the end of my remarks without, it seems, ever having gotten to the middle.  Some of you may now expect me to throw myself on the mercy of the court, or, like Puck at the end of Shakespeare’s A Midsummer Night’s Dream—a play that features a donkey in need of saving—to ask my audience for its “pardon.”

But I have a different thought—to suggest how a presentation of apparently dubious value and equally dubious veracity might be shown to contain more than chaff.

I’ve entertained the ideas of animals as fellow citizens; of possessing a national character or spirit; of performing heroic rescues, even in the form of a military operation; and of being, in many ways, very much like human beings.  In the process, I’ve also touched upon some still–culturally relevant representations of animals in 20th-century popular television and film.

If there are problems with these ideas—as there surely are, for example, with any extreme anthropomorphic understanding of animal thought and behavior—there are also benefits.  If we allow ourselves to approach these ideas as suggestive and metaphorical—as we would approach a poem, for example—we might quickly find ourselves fruitfully meditating on a number of pertinent topics.  These include:

We might also find ourselves contemplating some hidden functions of popular artistic representations of animals—for example, how they affirm at a societal level our ethical responsibility to treat animals humanely and respectfully, and how they strongly motivate us to be protective, unlike Darwin’s Nature, of both the individual and the species.

In sum, I hope that my tale of misreading this morning may, in certain ways, function for you as an imaginative jumping-off point.  In the best possible result, you may be spurred to build upon—or should I say rescue—my rather oblique treatment of some pertinent “big ideas.”  Embarking on such a project may well benefit the work you do.  But whether it does or not, it will likely help to deepen your own appreciation for why that work is so important.