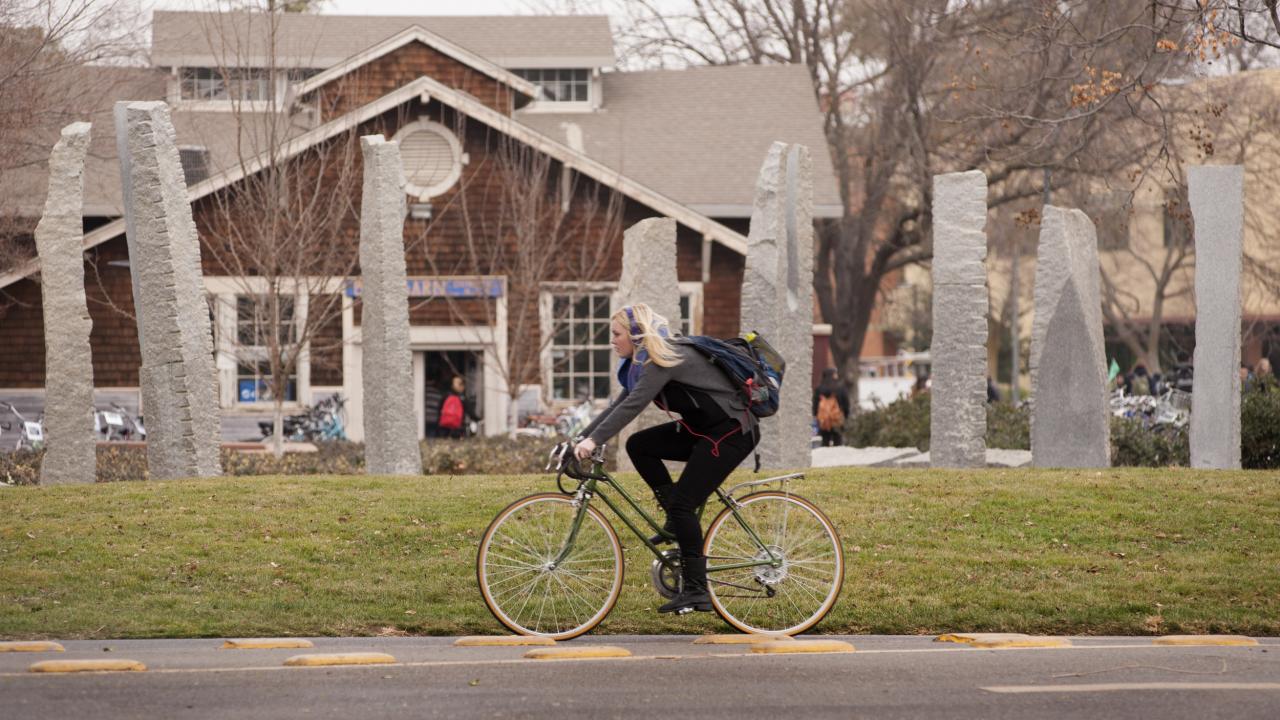 This year when I began preparing my commencement remarks, I was more than usually conscious of how difficult it was to come up with a message that could justify delaying the important business of awarding of your degrees. I knew that my fellow speakers would do an excellent job of reflecting on your UC Davis experience and imparting valuable wisdom.

I wanted very much to underscore that your getting to this day is a truly great achievement—because it is. But it occurred to me that this topic, too, would be well covered by the other speakers, and you and your families would tire of so many people singing your praises.

So I decided that I would take a different tack today and deliver a sort of anti–commencement speech. I don’t mean that I’ve become an anti-graduation militant and now intend to denounce this hallowed tradition before the world. I mean only that I’ve decided to contribute to today’s ceremony in a different way.

Your graduation proves that you’ve been working very hard, for many years. My belief is that today, of all days, you deserve a relaxing canoe ride from at least one of your speakers.

So I intend to use my time merely to share with you, and make a few comments about, two very short poems. I hope you find it rewarding to glide along with me the whole way. But if at some point you choose to leave me behind and follow your own course, or even send that important text—well, you’ve earned it. There won’t be an exam at the end.

Some of you may be saying to yourselves: “With all respect to the Acting Chancellor—who undoubtedly means well, and is an excellent speaker—how is a discussion of poetry relevant to, you know, all of us?” I could respond to this good question with a rigorous interrogation of its underlying logic—which I’m sure all of you would feel was an hour well spent. But in the interest of keeping the program moving, I will simply affirm an idea that I hope is not new to you—namely, that literature is not only for literature scholars, but rather for everyone.

The first poem I want to share with you today is called “Hymn to Adonis.” It was written by the ancient Greek poet Praxilla in the 5th century B.C.E—before the Common Era. Let me begin again, this time with more precision. I want to share with you the only three lines that have survived of the longer poem that “Hymn to Adonis” once was. Like Sappho, Praxilla was one of the best-known female poets, and one of the best-known poets of either gender, in the ancient world. Let me read the three lines to you in the original ancient Greek.

This fragment records the words of the recently deceased Adonis who is speaking to his fellow shades in the underworld. Asked to name what, in death, he most misses about being alive, Adonis replies:

Finest of all the things I have left is the light of the sun,

Next to that the brilliant stars and the face of the moon,

Cucumbers in their season, too, and apples and pears.

The lines, translated here by the eminent Hellenist Bernard Knox, have historical interest for several reasons. We know little about the author, Praxilla, and this is one of only a handful of small fragments of her work that have survived the ravages of time. Indeed, it has survived only because others quoted it. The main reason it was quoted was because the central idea it expressed was thought to be ridiculous. It was ridiculous because the speaker, Adonis, likes cucumbers, apples, and pears enough to compare them to the sun, stars, and moon. The phrase “sillier than Praxilla’s Adonis” was a widely known put-down in the ancient world.

If you like cucumbers, apples, and pears a lot—perhaps as much as you like the sun, stars, and moon—you may wish to read this poem as a quietly revolutionary declaration of what is truly important in life. At the same time, you may be glad to have come across such exquisite lines from a poet who lived so long ago, and even wonder if this is an early example of women expressing different priorities in art than men do. We don’t know if Praxilla thought Adonis was silly or not for liking cucumbers so much, so there is room for debate.

The second poem I want to share is by the 19th-century English romantic William Wordsworth. The idea of this 12-line work is simple and straightforward. The speaker briefly describes how profoundly he has been affected by the death of his beloved, a woman named Lucy. Here is the complete poem:

She dwelt among the untrodden ways

Beside the springs of Dove,

A Maid whom there were none to praise

And very few to love:

A violet by a mossy stone

Half hidden from the eye!

—Fair as a star, when only one

Is shining in the sky.

She lived unknown, and few could know

When Lucy ceased to be;

The difference to me!

It was this type of poem that earned Wordsworth his textbook reputation for radically changing the content and language of English poetry in the late 18th and early 19th centuries. If you think of poetry as an expression of powerful emotion—if you’ve ever written a poem with that aim in mind—chances are you got that, at least indirectly, from Wordsworth and his fellow romantics. When you became an adult, you may have decided, as the modernist poet T. S. Eliot did, that this sort of poetry was overly emotional and thus rather embarrassing—perhaps as silly as Praxilla’s Adonis.

There’s a scholarly book called The Unremarkable Wordsworth, which is an appropriate title given that Wordsworth’s subjects and language are, on the surface, very ordinary—not ordinary like a cucumber, exactly, but ordinary like an old Cumberland beggar walking very slowly along a country road. But Wordsworth takes his ordinary subjects and shows us how they are actually remarkable. It was his express intention to wake the world from its slumber, from its inability to see what was truly important. As it happened, the eminent Victorian philosopher John Stuart Mill credited Wordsworth, for all the ordinariness of his poetry, with changing his life.

If we consider the two poems together, it’s easy to see that they share more than a focus on the ordinary.

I am struck by how they challenge us to go beyond conventional wisdom. You may be thinking that we don’t need to consult poetry to receive this encouragement. Aren’t you and I already urged, with great frequency, to “think outside the box”? Or, to use a phrase associated with an Apple that is very different from the apples mentioned in Praxilla’s poem, aren’t we constantly urged to “Think different”?

But I wonder if most of us have considered very deeply what thinking outside the box really entails. How do we know when we’re doing it? And when does the thought that was once outside the box become a new box that we then need to think beyond? And here’s a final question that is even more daring—some might say sillier—than the others: In a present- and future-oriented age such as ours, might not truly thinking outside of the box require us to understand and even value the past?

Clearly, these two poems not only give us examples of “thinking different,” but also encourage us to engage in a particular “different” way of thinking.

Let me explain what I mean by asking a question: What are the things in our world that we most value? By all appearances, very many of them fall under categories you hear spoken of with admiration every day: innovation, efficiency, Forbes 500–level wealth, Beyoncé-level celebrity, a lifestyle of luxury and ever-increasing convenience, and not least important, scientific and technological miracles. To be sure, there are attractive aspects to all of these things, and many scientific and technological advances have improved our lives, some of them greatly.

But what happens if we frame the question as Praxilla did: What things, after we die, will we most regret leaving behind? We might come up with a different answer. We might even come up with an answer that is more in line with the so-called silly answer of Adonis or the words of the speaker who mourns the death of an unremarkable person named Lucy. That is to say, we might feel that, even today, there is still much to be said for many things that our age seems intent on eliminating. I’m speaking, for example, of face-to-face human interactions, of simple pleasures, and even of tradition. I’m speaking of the ability to sympathize with and value others based not only on their socioeconomic class, or religious or ethnic affiliation, or curriculum vitae, but also on their inherent worth as human beings, and their small as well as great virtues.

I won’t argue that it was an intention behind the two poems, but one thing I value in them is how they seem to say, across the centuries: Have confidence in the judgments and values that come from your best self, a self that is anchored in humility, sympathy, and generosity. Don’t be afraid to declare and stand up for the things and people you truly value or love. Do this even if you expect that some others—or many others—will call you silly, or worse. Do this especially if you expect others will disagree.

Today, and in the years ahead, you will hear many people praise your abilities and attainments. They will remind you that you have the ability to do great things. You are among a select group of individuals who can boast a first-rate education that is both well balanced and distinguished by deep knowledge in one or more specific areas. What you have learned affords you excellent preparation not only for a wide range of careers, but also for the sorts of critical thinking that conscious existence and our democratic society demand.

I share this optimism about your future, but let me offer a final thought: While you’re in the process of choosing the great things that you will do, and then while you’re doing them, I think you could do worse than contemplate, occasionally, the two poems I’ve just read to you. You might even find that these poems, as irrelevant and “silly” as they may seem, will help you do your best work, and make your contributions to society even more valuable.

Congratulations to the Class of 2016, and best wishes for the journey ahead!