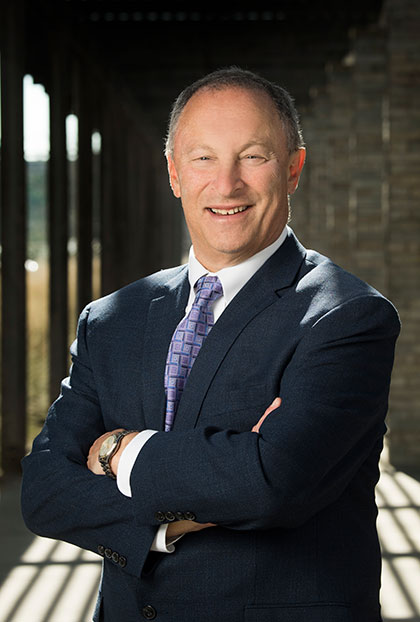 Ralph Hexter arrived at UC Davis on January 1, 2011, to become provost and executive vice chancellor. He also holds an appointment as distinguished professor of classics and comparative literature.

As provost and executive vice chancellor, he serves as the number two person in the UC Davis administration, reporting directly to Chancellor Gary May and representing the chancellor in his absence. He is the campus’s chief academic and operating officer and, in that post, oversees the work of the deans and serves as the chancellor's principal liaison to the Academic Senate. He is responsible for guiding the development of academic priorities and strategies; working with the deans to recruit and retain a diverse and talented faculty; and in coordination with the chancellor, leading the university's strategic planning process, allocating resources to advance strategic priorities, and, with his fellow vice chancellors, managing the daily operation of the campus.

Provost Hexter’s direct reports include the deans of all four colleges and six professional schools; the vice provost/deans of Undergraduate Education and of Graduate Education; the vice provosts for Academic Affairs and for Global Affairs; the CIO/vice provost for Information and Educational Technology; the university librarian; the directors of both the Mondavi Center for the Performing Arts and the Jan Shrem and Maria Manetti Shrem Museum of Art; and the chief of police and chief compliance officer.

At UC Davis, he holds an appointment as distinguished professor of classics and comparative literature. His research focus is on the interpretation and meaning of classical Greek and Roman literature from antiquity through the Middle Ages to modern times.

Yale University: M.Phil and Ph.D. in comparative literature, 1979 and 1982, respectively.

At UC Davis, Provost Hexter plays a central role in:

Provost Hexter received his A.B. degree in English literature from Harvard College in 1974. He earned a B.A. and M.A. in classics and modern languages at Oxford University in 1977 and 1982, respectively. He also earned an M.Phil. and a Ph.D. in comparative literature from Yale University in 1979 and 1982, where he taught in the classics department from 1981 to 1991. During his final year there, he served as acting associate dean of the Graduate School.

In 1995, he joined the faculty at the University of California, Berkeley also as professor of classics and comparative literature, advancing to posts as chair of Comparative Literature (1996–98), dean of Humanities (1998–99), dean of Arts and Humanities (1999–2005), and executive dean of the College of Letters and Science (2002–05).

From 2005 through 2010, he served as president of Hampshire College in Amherst, Massachusetts, a selective liberal arts college with 1,500 students known for its innovative student-centered pedagogy and curriculum.

In April 2016, after five years in UC Davis’s number two position, he was appointed acting chancellor, and from September 2016 through July 2017 he served as interim chancellor. On August 1, 2017, he returned to his post as provost and executive vice chancellor.

In all of his leadership positions, Provost Hexter has made it a priority to foster excellence across the full range of disciplines, and to promote equal opportunity, diversity, and inclusion for students, faculty, and staff. A recipient of the University of Massachusetts’ Continuing the Legacy of Stonewall Award (2008), he was a founding member of the LGBTQ Presidents in Higher Education. From 2012 to 2014, he co-chaired with Barbara J. French the UC Task Force and Implementation Team on Lesbian, Gay, Bisexual and Transgender Climate & Inclusion.

Throughout his career, Provost Hexter has continued to teach, lecture, and publish on the interpretation and meaning of classical Greek and Roman literature from antiquity through the Middle Ages to modern times, as well as other topics. His most recent work includes “The Kisses of Juventius and Policing the Boundaries of Masculinity: The Case of Catullus,” in Jennifer Ingleheart, ed., Ancient Rome & the Construction of Modern Homosexual Identities (2015), and Reading the Past Across Space and Time: Receptions and World Literature, co-edited with Brenda Deen Schildgen (2017), which includes his essay “Epic Worlds.”

In 2016, Provost Hexter was elected to the American Academy of Arts and Sciences.