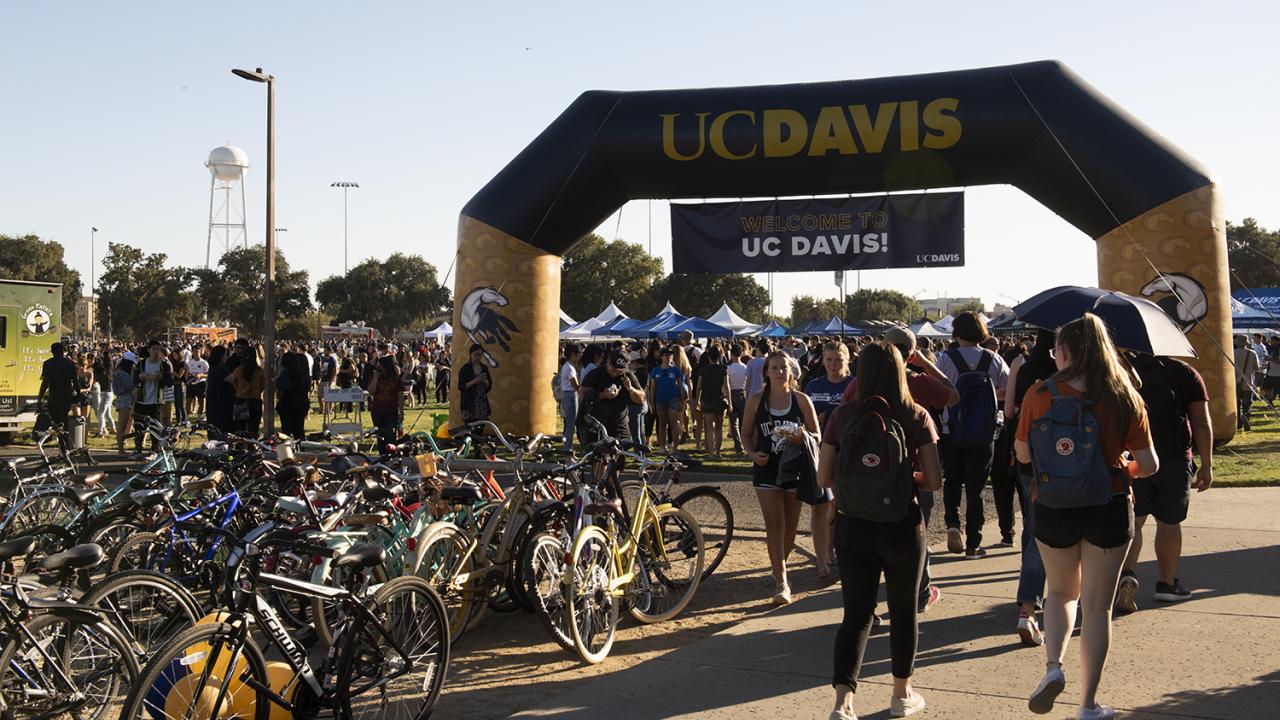 With the new academic year well underway, I wake up every morning anxious to take on the new day. I’ve got several events marked on my calendar and other goals I’m looking forward to in the new school year. Here’s a preview:

I can already hear it now, the California Aggie Marching Band-Uh! playing tunes and leading a downtown parade of pajama-clad students for Pajamarino. I can hear the cheers from the stands of Aggie Stadium as we take on Idaho State in the homecoming football game.

The city of will turn into a sea of blue and gold as UC Davis celebrates homecoming on the weekend of Oct. 12.  All are welcome - students, parents, alumni, our friends in the city and beyond – as we celebrate what it means to be an Aggie. From old roommates reconnecting over a slice at Woodstock’s Pizza to our annual Parent and Family Day, homecoming 2018 is bound to be a hit.

I’m looking forward to proceeding on time with plans to build vastly more student housing on campus. We know this is a top issue for our students. More and more of them are competing for fewer and fewer affordable rentals off campus. We owe it to them to make sure that affordable housing and other basic needs are met.

The University of California Board of Regents agreed, and in July gave us the green light to proceed with construction for thousands of new beds on campus. We look forward to our agreement with the City of Davis and Yolo County on our housing projects as well as transportation, traffic and improved town-gown relationship overall. Our students deserve nothing less.

In February, I treated a group of students to a screening of “Black Panther” at the Regal Cinemas in downtown Davis, followed by ice cream sandwiches across the street at Cream. Then, in April, I took some of our student leaders to see “Avengers: Infinity War.”

Watching these comic book heroes come to life isn’t just a perfect way to decompress from the busy life of “chancell-ing.” I’m energized by their talents and ambitions, and their thoughts on campus matters is invaluable. I’m hoping we can continue “chancellor’s movie nights” when “Aquaman” premiers in December and “Captain Marvel” is released next March.

Speaking of superheroes, the truth is that we have many of them in our midst every day at UC Davis. You might spot some of them around town wearing #AggieHeroes t-shirts.

As the year moves along, we’re putting our students front and center and encouraging them to be “Aggie heroes.” That was the theme of our festive Fall Welcome on Sept. 24, where we spotlighted some students and faculty who work hard every day to create a better tomorrow not just for their peers, but the world at large. We’re going to continue celebrating the “Aggie heroes” all around us, and encourage everyone to use their talents and energy for doing good in the world.

It’s a must that UC Davis keeps pace with California’s changing demographics of California. The good news is that about 25 percent of our undergraduate student body comes from underrepresented backgrounds. UC Davis is not only more diverse than ever, we’re also now eligible to be designated a federally designated Hispanic Serving Institution (HSI) by the U.S. Department of Education.

This opens the door to significant federal funding to support the academic success of our underrepresented students, as well as our undergraduate student body as a whole.

Come spring, we hope to be certified as HSI, which would make UC Davis one of only nine large research universities in the country to achieve this status. This speaks volumes about our culture of diversity and inclusion on campus.

Watching our UC Davis student-athletes from the sidelines and stands made for some of the most exciting moments last year. Several Aggie athletics programs are on a winning streak like never before.

We’re expecting more victories in the upcoming year. Keelan Doss, our All-American wide receiver, will be back for his final football season at UC Davis.  Our men’s and women’s basketball teams are both returning from winning seasons. And that’s just a small sample. Our sporting events are a lot of fun, and I encourage the community to come out and support these exceptional student-athletes.