CHANCELL-ING: Hmmmm … That ‘May’ Be the Chancellor 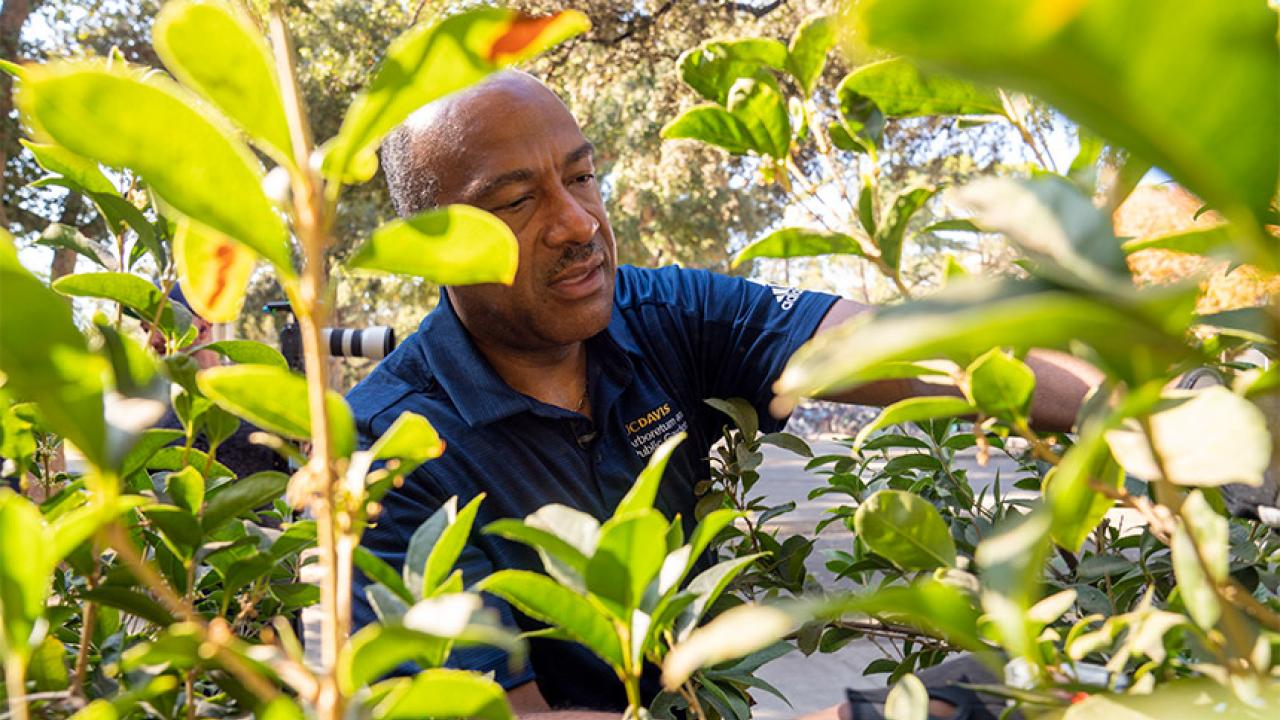 I showed up to campus one recent morning with a much different set of work tools than usual. In this case, I was equipped with a pair of pruning shears. My mission? To get a hands-on learning experience about the people who make UC Davis shine.

I met with the Arboretum and Public Grounds team, a hard-working crew dedicated to not only keeping our campus beautiful, but upholding our principles of sustainability. They’d been given a heads-up that a new member was going to join their team for the day. However, they didn’t know it was going to be me.

Could I hang with this grounds crew and not cut myself? And what could I learn about the workers who show up to campus each day with their “A” game?

That was the premise for the first installment of “That ‘May’ Be The Chancellor.” It’s a new UC Davis video series that’s in the spirit of “Undercover Boss,” a TV show that first aired in the United States in 2010.

Our program gets me on the front lines with the people who raise UC Davis each day to greater heights. I want to help share their stories and show the heart of our UC Davis community. You can find it on YouTube or on the web at leadership.ucdavis.edu.

Hearing stories from the campus community

I’ve never wanted to be the kind of leader who just stays parked in an office all day. You can’t help but feel inspired when meeting the people in our diverse UC Davis community — the students, staff and faculty who make this great university come alive. Their stories, dreams and successes remind me every day of UC Davis’ mission to accelerate social mobility and make this world a better place.

They are people like Mario, the head groundskeeper who led our team that morning. He came to the United States from Mexico as a child, and started working on our sprawling UC Davis gardens and greens while earning a degree in environmental horticulture. Mario was recently promoted to a supervisor role, another great step on his journey at UC Davis. He intends to stay a while.

“We like the sense of community (in) Davis — not just on campus but the city itself,” he said.

Mario and his crew take great pride in keeping the campus looking postcard perfect. Our lush Arboretum is a jewel of the entire region, a popular spot for joggers, family walks and others seeking tranquility. This crew’s dedication and hard work keeps it thriving for all.

I was especially impressed to hear about sustainability being at the front of their minds, like seeking irrigation methods that use less water. They are a direct reflection of why UC Davis is ranked No. 1 in the country for sustainability.

But, how much could the chancellor hang with them?

Our mission for the morning was to thin some bushes around campus. I started by driving a Gator utility vehicle with Mario that hauled a few of our work tools. We rolled past Mrak Hall, around the Shields Library and went to work near North Hall with those pruning shears.

I’d like to think my clipping was a little helpful, but these guys are the pros. By the end of it all, I had a whole new appreciation for what Mario and his crew bring to UC Davis every day. I was proud to wear the blue polo shirt that declared, “UC Davis Arboretum and Public Grounds.”

The next installment of “That ‘May’ Be The Chancellor” is set for early spring. I’m still plotting about where to show up. The expansiveness of UC Davis means a world of opportunities to meet side-by-side with its workers.

Like I said at the end of this first video: I’m not sure where I’ll be next. But, look up and that “May” be the chancellor.

I hope you’ll tune in!

CHANCELL-ING: Getting Back to Business