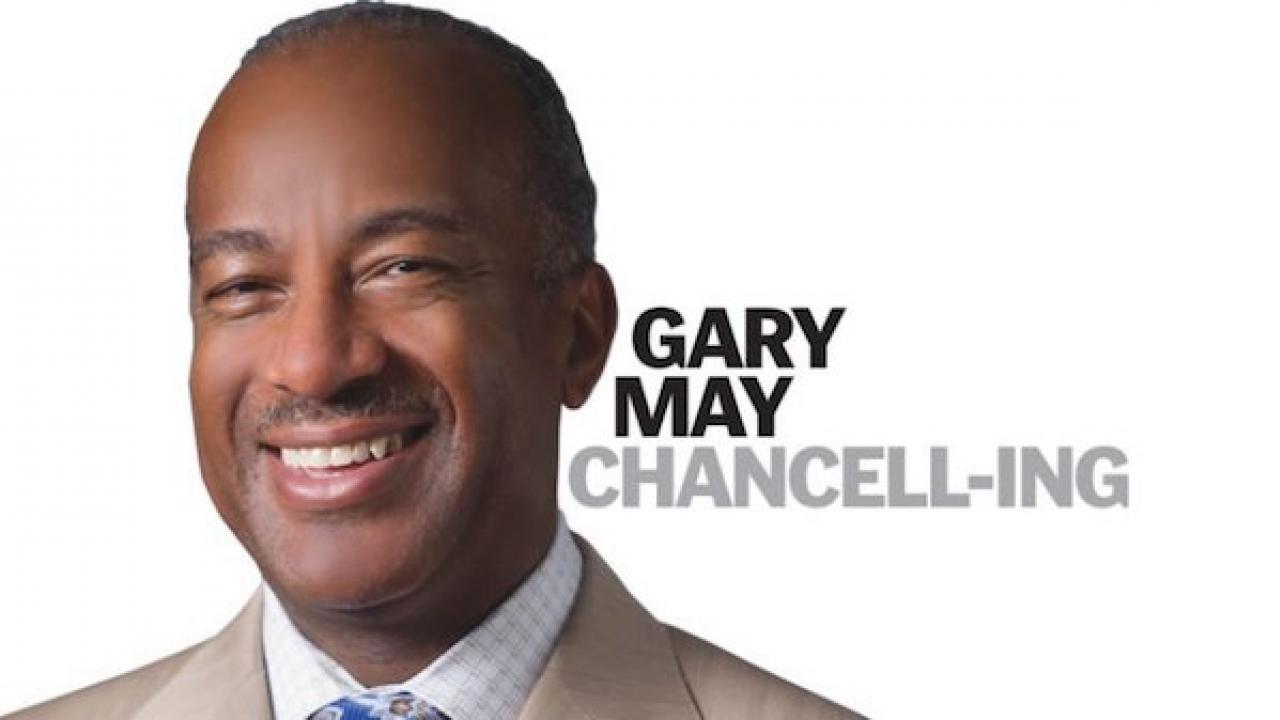 So, What Does a Chancellor Do?

The kid growing up in St. Louis, glued to “Star Trek,” never would’ve believed this moment was possible. But there I was in May, on stage at the Mondavi Center with William Shatner by my side.

This edition of the Chancellor’s Colloquium series included a screening of “Star Trek II: The Wrath of Khan” followed by a Q&A session between Captain Kirk himself and me. He opened our conversation with a direct question:

“Can I ask you, Gary, what does a chancellor do?”

The theater filled with laughter and applause. Shatner’s opening question was a good ice breaker — and (spoiler alert) helped lighten the mood after Spock’s tearjerker death toward the end of “Wrath of Khan.” But, it’s also a question that I get fairly often.

So, what does a chancellor do?

The easiest way to summarize the job is like this. A chancellor’s job combines the responsibilities of a school’s principal and a city’s mayor.

The academic side alone is a huge undertaking. UC Davis is home to 39,000 students from all over the world and nearly 24,000 employees in Davis, Sacramento and across the region. We offer 102 undergraduate majors and 101 graduate programs. I coordinate with Provost Ralph Hexter, our vice chancellors, deans and leadership teams, students, staff, alumni and countless others to make sure we’re providing the best possible education.

The well-being of our UC Davis community is everything. That’s why I launched three task forces last year that address student food security, mental health care and affordable student housing. We recently established a permanent Basic Needs Advisory Board that continues this critical work.

Along with addressing the needs of the day, a chancellor must also look ahead. UC Davis is now moving forward with a 10-year strategic plan, “To Boldly Go,” that allows UC Davis to strengthen our mission and vision over the next decade.

We’re setting new goals for how we teach while preparing students for the global workforce. We’re boosting our strengths in diversity, taking our research and entrepreneurial spirit to new levels and making sure the world hears our story.

A key aspect of keeping the university running well is collaborating with the other nine UC campus chancellors, and with the UC Office of the President and Board of Regents. We share best practices and discuss how we can work together to improve our processes and programs. We make sure Californians continue to have access to the best education in the world.

That’s the administrative and academic side to the job. The mayor-like part helps build lasting partnerships far beyond our campuses.

After all, UC Davis is like a city unto itself. On a typical day, nearly 40,000 people come to our main campus to study and work. That’s about twice the population of nearby Dixon. The university generates more than $8 billion in economic activity each year and supports about 75,000 jobs across Davis, Sacramento and around the state.

Connecting with civic leaders in the area remains as a critical part of the role. I’m proud that my team and I have worked productively with Mayor Brett Lee and members of the Davis City Council on matters related to housing, safety and transportation. I feel like our “town-gown” relationship has reached a new era of strength, and I’m confident we’ll continue to find common ground on important matters. U.S. Congressman John Garamendi has been a strong and consistent supporter of our research, teaching and public service mission.

Across the Causeway, I’ve enjoyed great relationships with Assemblymembers Kevin McCarty and Cecilia Aguiar-Curry and State Sens. Richard Pan and Bill Dodd, and Sacramento Mayor Darrell Steinberg. Along with Rep. Doris Matsui and key members of the area’s business community, we’ve found major support and excitement for the Aggie Square project on our Sacramento campus.

Overall, the job of chancellor also means a lot of interactions with our stakeholders around the world. I’ve previously described my role as UC Davis’ “head cheerleader and friend-raiser.” There’s not much downtime in the job, but that’s OK. Every day spent “chancell-ing” is a new adventure. You can’t help but feel energized when sharing the great news from UC Davis with the world.

No matter if I’m involved in the academic or civic side of being a chancellor, one thing remains common — it’s ultimately about helping people find their pathways to success.

That’s the most gratifying part of the job, to hear about former students doing great things in the world and helping others. It’s about helping UC Davis contribute to strong communities in the city, region and beyond.

Put it all together, and that’s what a chancellor does.