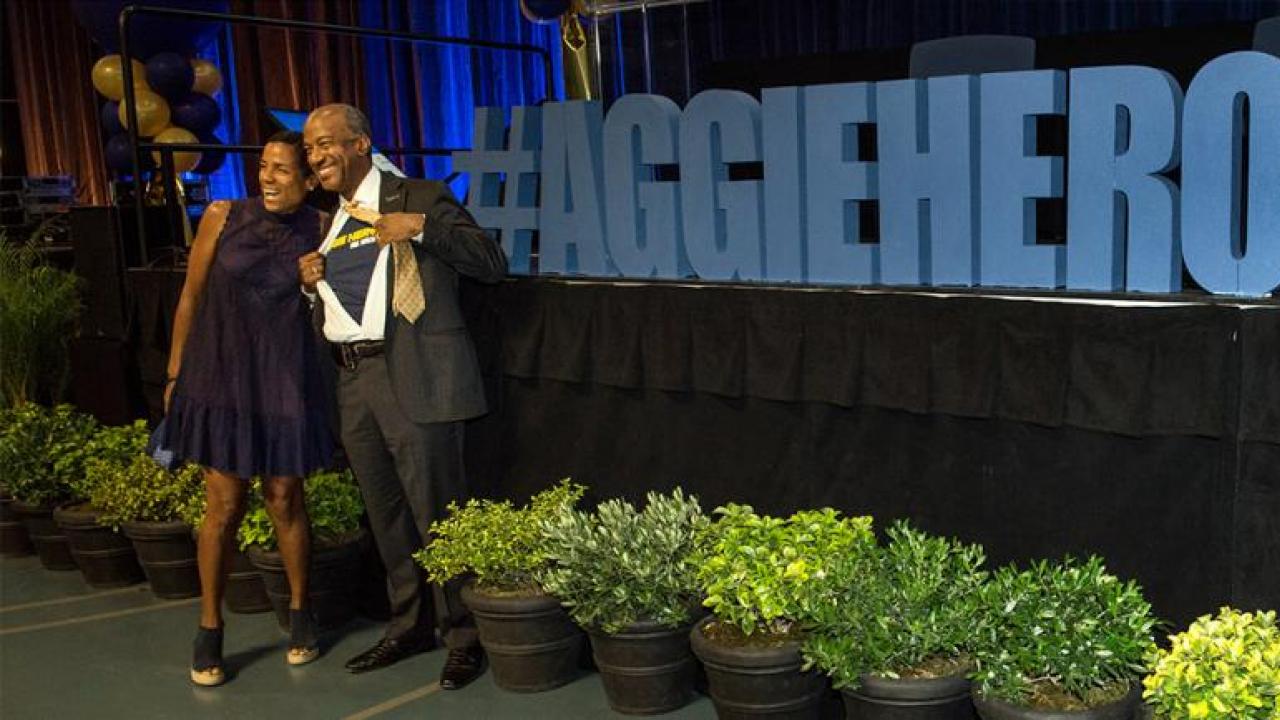 The ARC Pavilion at UC Davis was packed as the Cal Aggie Marching Band-uh snaked through the crowd and Scott Moak, Sacramento Kings public access announcer and UC Davis alum, kept everyone pumped between speeches.

That’s how we kicked off the new academic year in September. To put an exclamation point on this new Fall Welcome event, I unbuttoned my dress shirt on stage, Superman-style, to reveal a blue-and-gold T-shirt that read: “Aggie Heroes.”

It was my way of honoring the student heroes in our midst. The event was all about putting students front and center and having a lot of fun, too.

They might not wear capes or leap tall buildings in a single bound, like those in the comic books downtown at Bizarro World. These Aggie Heroes are using their talents and powers for the greater good of our university and beyond.

That afternoon I told the crowd, “You become an Aggie Hero through your everyday actions and words. It’s about taking a mindful approach to what you do and say for the sake of your peers, your university community and humanity at large.”

Shaniah Branson is an Aggie Hero in my book.

Though she’s the first in her family to attend a four-year college, Shaniah, who serves as ASUCD vice president, works hard to tend to the welfare of her student peers. She was a member of a task force I appointed to help students struggling with food insecurity.

You can’t succeed at UC Davis or in your daily life if you are constantly making choices about when to eat or how to get by financially. Some of our students are in this situation. Shaniah wanted to help find solutions and worked with faculty, staff and other students to address challenges of food access and affordability. Her task force advocated for better promotion of food and health literacy on campus and to increase supplies at The Pantry, the student-run food bank.

Shaniah is a political science and communications major on track to go to law school, where she’ll build her powers in the fight for social justice and equal application of the law.

The members of the university’s task forces on student food security, affordable student housing and mental health care are like a Justice League for UC Davis.

As I looked into the Fall Welcome crowd that September afternoon, I knew that Aggie Heroes were everywhere. Rina Singh, chair of the ASUCD Ethnic and Cultural Affairs Commission, spoke passionately about the need for diversity and equity on campus.

Others were in the audience, using a microphone to express their hopes of building community at UC Davis, sharing a welcoming spirit and encouraging others to break out of their comfort zones for the sake of supporting their peers.

Our Aggie Heroes aren’t just students, either. More than 400 faculty members have stepped up to support our growing population of first-generation students — those from families with no college degree. Nearly 45 percent of this year’s new undergraduates are first-generation, and these faculty members — who were first-generation students themselves — have signed up to serve as mentors for these students. The faculty know the challenges of breaking ground in their families with higher education, and they’re eager to lend support.

As the academic year unfolds, you’re likely to see the #AggieHeroes hashtag on Twitter and students wearing their Aggie Heroes T-shirts around town. Our heroic journey at UC Davis is just getting started.