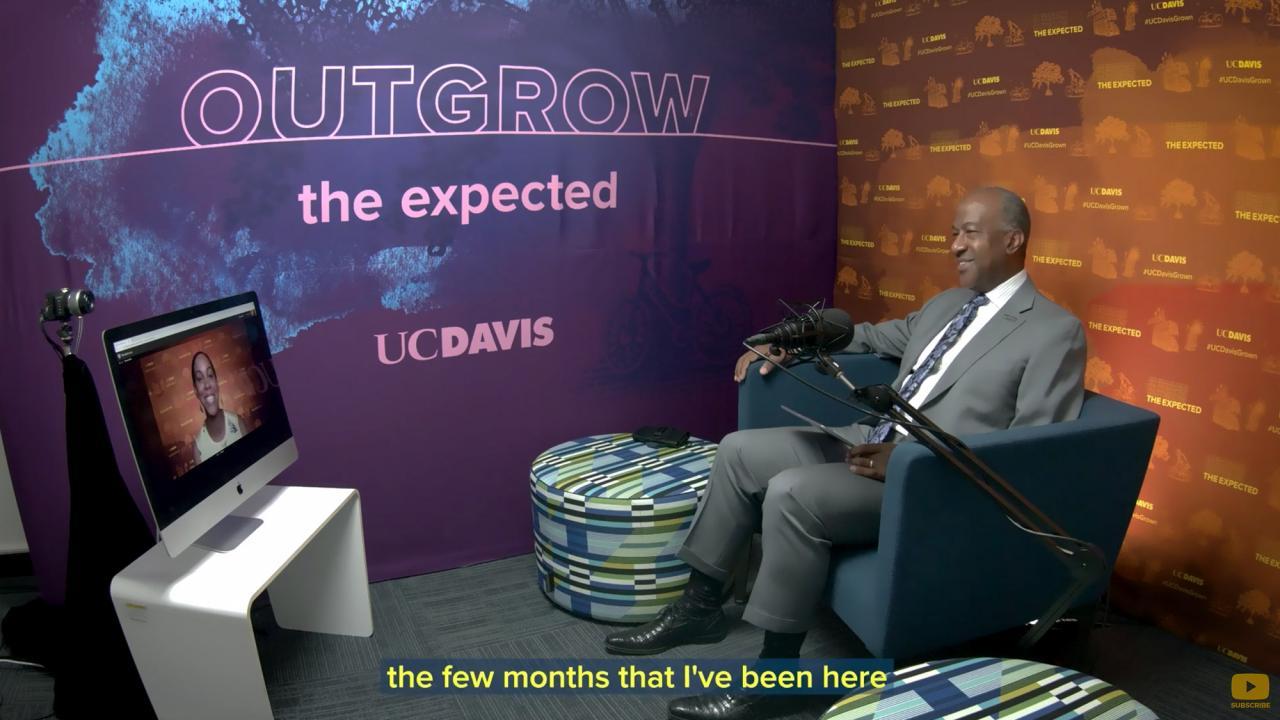 Even in the midst of a pandemic and our days of social distancing, we’re finding creative ways to get “face to face” with the UC Davis community. That’s the premise of my new interview show that puts the spotlight on our dynamic students, faculty and staff. It’s called Face to Face with Chancellor May, and it gives me the opportunity to tap into my inner Phil Donahue (for those of you who know who he is). While students ask me questions via Instagram on my “Thursday Thoughts” video stories, this time I turn the tables and sit in the interviewer’s seat and learn from people in our community who are contributing to the public good.

I’m used to being a moderator for a variety of panels related to higher education. In my Chancellor’s Colloquium series, held once per quarter, I interview the invited speaker. I started with Alan Alda about science communication from the stage of the Robert and Margrit Mondavi Center for the Performing Arts. I interviewed William Shatner, a real treat for me, and LeVar Burton, both of Star Trek fame. In these and other interviews, I appreciate getting to know a person better, digging deeper into issues they care about, and sharing a laugh or two.

On a side note, my next Chancellor’s Colloquium guest will be Rosie Rios. Rosie served as U.S. Treasurer under President Barack Obama. She’s the proud parent of a current UC Davis student. I hope you can join us on May 19 for this discussion.

In Face to Face With Chancellor May, we get to hear from people who are having a considerable impact on the community.

They are people like Akshita Gandra, a UC Davis senior who’s majoring in cognitive science. She is also the founder of The Revival Zine, an online publication that’s dedicated to social justice and feminism and reaches college students all over the country. She co-founded the UC Davis chapter of PERIOD, which worked with campus administrators last year to stock restrooms with free menstrual products on a trial basis. No wonder that Forbes named Akshita among its “Forbes Under 30 Scholars.”

Akshita and I covered quite a bit of ground in our virtual discussion. She talked about her decision to attend UC Davis (the diversity of its majors was a selling point), how she’s staying positive during the pandemic and her goals of serving underrepresented student voices through The Revival Zine.

Akshita also flipped the script and asked me what hobbies and interests of mine impacted me the most. I mentioned how I liked to buy multiple jigsaw puzzles when I was a boy, throw all the pieces in the middle of the floor, and do all the puzzles simultaneously. My mom kind of shook her head, but it was actually a lesson in multitasking — something we all need to be adept with today.

I had another thoughtful and fun discussion with Theanne Griffith, who was the second guest on Face to Face with Chancellor May. Theanne is a relatively new UC Davis faculty member who is making big waves as both a neuroscientist and children’s book author. I spotlighted her in my “Chancell-ing” column back in November, as she was featured on the Today show’s website for her series of books titled The Magnificent Makers.

Theanne talked about her combined interests in science, storytelling and writing and how she ultimately made the jump to become an author. The Magnificent Makers series is dedicated to passing along scientific concepts in fun and creative ways and making these stories especially relatable for children of color. We definitely need more books like these and it’s exciting to see Theanne leading the charge.

I can’t wait for the next episode. On May 25, I’ll be joined by Jennifer Gross, the head coach of the UC Davis Women’s Basketball Team. She’s among the most legendary of coaches at UC Davis, one who led her Aggies to the top of the Big West Conference for five years straight. The team has also earned a spot in the NCAA Tournament — the Big Dance, as they say — twice under her leadership.

Face to Face with Chancellor May airs on the last Tuesday of the month and you can find them on UC Davis’ YouTube channel. I hope you’ll watch.

Checking In With Chancellor May: Pivoting

CHANCELL-ING: A Tenacious Start to 2022

Checking In With Chancellor May: Aggie Pride at the Holidays