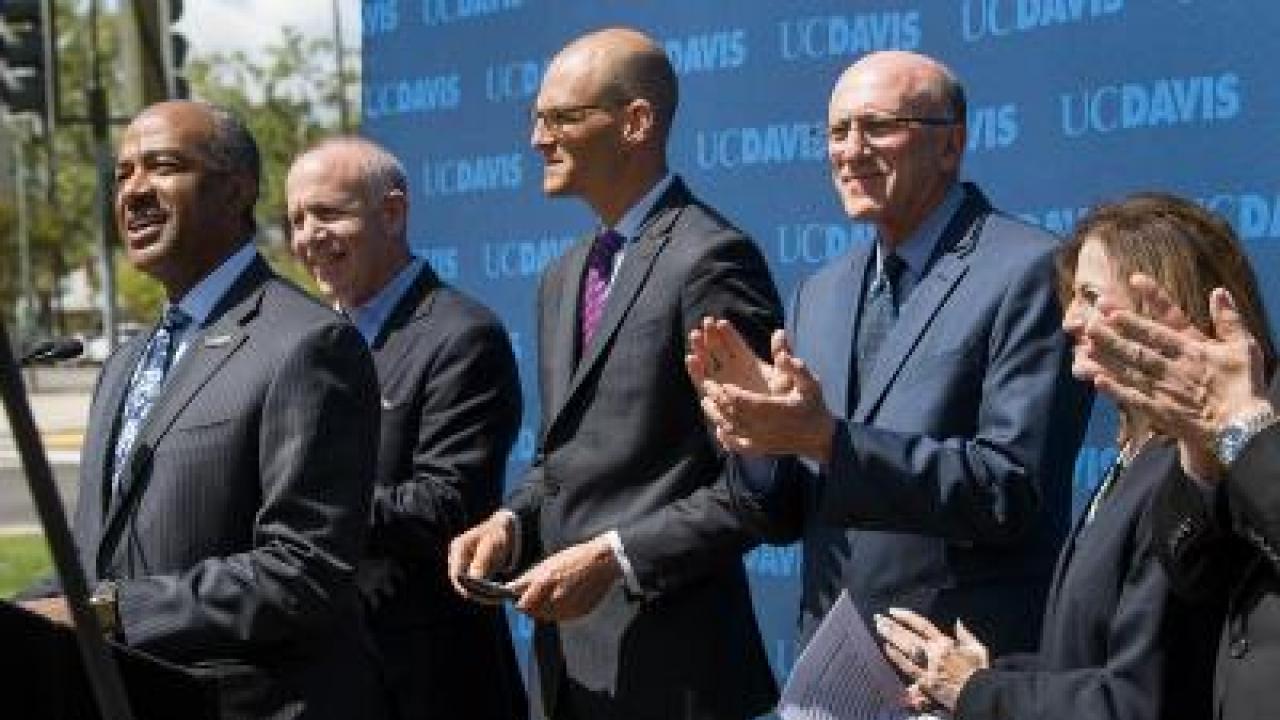 UC Davis Chancellor Gary S. May and Sacramento Mayor Darrell Steinberg today announced that they have chosen the UC Davis Health Campus in the Oak Park area as the location for the first phase of an innovation hub called Aggie Square.

The pair also announced the release of findings by the Aggie Square Working Group established in December to explore potential sites for housing the hub in Sacramento, transportation options between Sacramento and Davis, and potential city and state funding sources to support the overall effort.

After reviewing four options that analyzed five key characteristics for each geographic zone, Mayor Steinberg and Chancellor May determined that the UC Davis Health Campus would best meet the main goals of the project in the first phase of Aggie Square.

“Building this new center of innovation alongside the existing UC Davis Health campus will not only ensure a tight connection to the school’s great minds and resources but will also create jobs and economic development in the heart of Oak Park, along with more real opportunity for young people from all low-income neighborhoods in Sacramento,” Mayor Steinberg said.

Aggie Square will serve as a collaborative technology and innovation campus that leverages the university’s strengths to become the catalyst for economic change, creates jobs for its graduates, and helps spur the economic vitality of the broader Sacramento region. It will serve as a model public-private partnership, increasing technology transfer and creating opportunities for residents in the community and region.

Four locations in Sacramento were examined using the following criteria:

Each of the four sites was analyzed for “their potential to propel UC Davis research activity and attract affiliated public and private investment.” The four zones included downtown/Riverfront, which encompasses the Railyards; the UC Davis Health Campus; the Sacramento Center for Innovation, located seven miles east of downtown; and North Natomas. In addition to the five criteria above, each site was reviewed for its readiness, infrastructure and housing.

“I would like to thank the working group for its diligence, objectivity and thoroughness as they explored the viability of each of these areas,” Chancellor May said. “As we move forward together with community partners on Aggie Square, our commitment to building a stronger, more vibrant community will be a priority, including making sure we create economic development and jobs for the local community. Aggie Square has the potential to serve as a model for bringing diverse communities together for positive change.”

Building on the strengths of UC Davis and economic leverage of the city of Sacramento, the working group recognized several opportunities for public-private partners in the areas of life sciences, food systems, mobility, government and civic technology, and arts and communications.

In addition to job creation, internships for students will be a feature of Aggie Square, as will the opportunity for students to gain experience in research laboratories.

“Aggie Square is a quadruple win for the Stockton Boulevard corridor, the City of Sacramento, UC Davis and the State of California,” said Assemblymember Kevin McCarty (D-Sacramento). “This partnership will allow the University of California to accommodate more students, support small businesses in our community and foster economic development throughout the Sacramento region. The state will be an important partner in this project and I am committed to make sure this ambitious innovation hub becomes a reality.”

U.S. Representative Doris Matsui, (D-Sacramento) added: “This campus will serve as a key connecting point between the innovation happening in our region and the cutting edge exploration happening at UC Davis. In our 21st-century economy, it’s critically important that we’re being creative and inclusive about how we spur job creation and growth for the next generation. Aggie Square is an example of how we can work together as a community to achieve that future.”

In addition, the working group found that Sacramento and UC Davis can leverage a range of unique assets, take a “whole industry” approach in considering long-term planning, build a culture of partnership, and start with clear strengths and shared priorities. They also suggested that work begin immediately.

Mayor Steinberg and Chancellor May are not eliminating the other three options as potential areas to pursue in the years ahead. In the meantime, UC Davis will review a market analysis and develop detailed concepts of the UC Davis Health site.

“As a former UC Davis faculty member, I championed bringing UC Davis students and faculty, beyond the health system alone, across the causeway to engage with our communities in our region,” said Sen. Richard Pan (D-Sacramento). “I am pleased that Chancellor May is bringing Aggie Square to Sacramento so that innovation and technology from UC Davis will create more high quality jobs in the Sacramento region and benefit our communities.”

The Aggie Square Working Group’s report, and additional information on Aggie Square can be found on the UC Davis website.

CHANCELL-ING: We will get through this together

Why Aggie Square? And why me?

CHANCELL-ING: Hmmmm … That ‘May’ Be the Chancellor