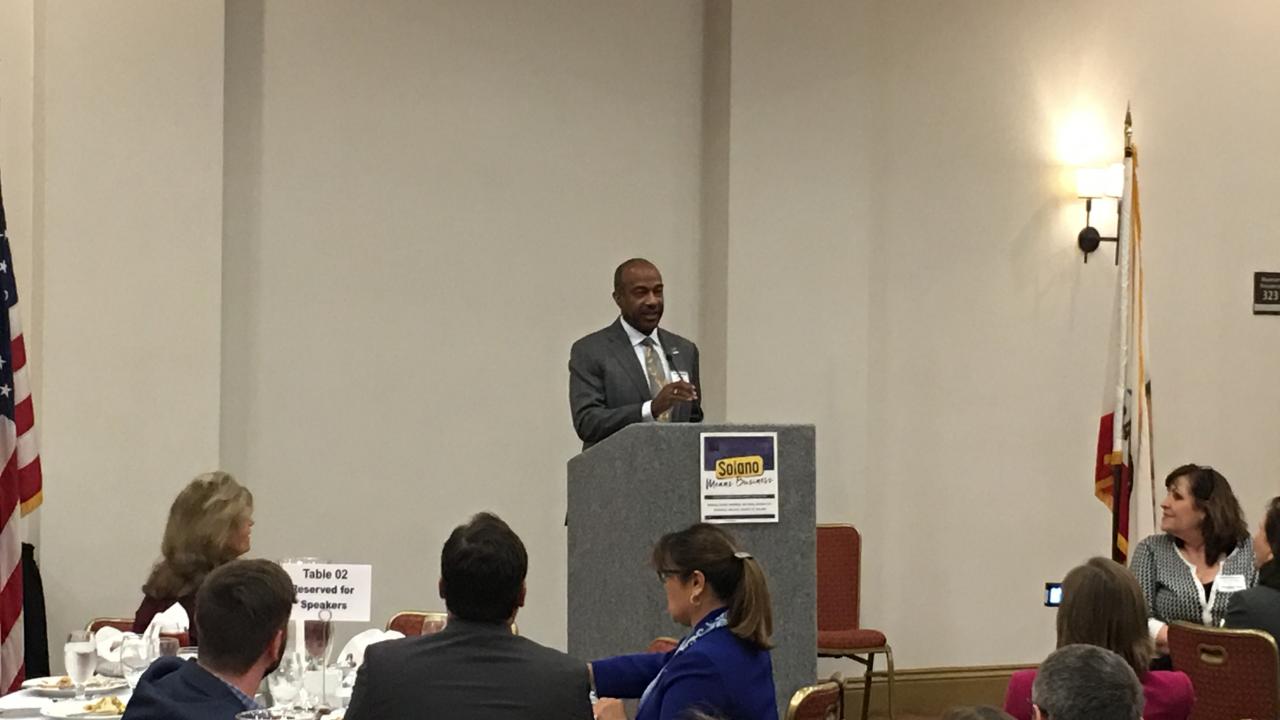 Remark as prepared for delivery at the Annual Meeting Luncheon in Fairfield for the Solano Economic Development Corporation.

It’s great to be here with our neighbors to the south and west.  I’m fairly new to Davis, having started as chancellor on August 1st.  But I’m somewhat familiar with this area from my graduate school days, when I was just up the road at UC Berkeley. I’m thrilled to be back in Northern California.  My family has been settling in well and I’m looking forward to opportunities that strengthen our university’s partnerships with surrounding communities.  My hope is that we can enter a new era of engagement with Solano County.

First, I’d like to congratulate Robert Burris on his appointment as the new president and CEO of the Solano Economic Development Corporation.  I know he’s well aware of UC Davis’ role as an economic generator from his previous work at the Sacramento Area Commerce and Trade Organization.  He’s been a great advocate for us, and I look forward to developing this relationship even more.

Solano County and UC Davis have plenty of foundation to work with.  Many members of our UC Davis community are also residents of Solano County.  We have students, staff and faculty commuting from Dixon, Vacaville and Fairfield. Part of south campus is in Solano County.  It’s home to the California Raptor Center and a host of our animal and agricultural research facilities.

This relationship goes both ways.  UC Davis offers Solano businesses like Genentech a steady stream of highly educated and skilled college graduates and interns. We also enjoy a great partnership with your largest employer, Travis Air Force Base. Ours is the only relationship you’ll find in the nation between higher education, Veteran’s Affairs and the Department of Defense.

The UC Davis Medical Center trains surgeons at the base’s David Grant Medical Center––the Air Force’s flagship medical treatment facility––, which serves more than 500,000 patients in the military and VA health care systems. UC Davis Health and Solano County also collaborate on mental health services.  We have a joint initiative known as the “Solano County Behavioral Innovation Plan that helps the county’s underserved communities find better access to these services. Our hope is that this interdisciplinary project will become a model for other communities around the nation.

We also have a shared interest in sustainability of Solano County’s agriculture.  The UC’s Division of Agriculture and Natural Resources has a field office here in Fairfield that readily assists growers with those highly valued walnut and tomato crops.

My hope is that our shared strengths with agriculture can lead to even more robust partnerships in the future.  Northern California is increasingly recognized around the world for the quality, quantity and technology of its food production. We have an opportunity to provide leadership and build on this momentum. Overall, we’re connected in an even broader way.  Some talk of a new California “mega-region” developing between Silicon Valley and the Sierra Foothills, with the I-80 freeway corridor being a key artery.

I see the future of innovation at UC Davis as being tied more and more to the economic growth of this mega-region and the growing diversity of skill sets and backgrounds of its residents.  We’re already one of the most ethnically diverse metropolitan regions in the country.

UC Davis is already a powerful economic engine that generates more than $8 billion in statewide economic activity.  Next to state government, we are the second largest employer in the Sacramento region, supporting 72,000 jobs between our Davis campus and UC Davis Health in Sacramento.

I’ve been on a “listening tour” since I started as UC Davis chancellor six months ago.  I’ve met with local business and community leaders such as yourselves as well as alumni, faculty, students and other constituencies that care about the future of our university. I heard what excites people about UC Davis and how we can improve. This tour has been a prelude to the development this spring of a university-wide strategic plan called “To Boldly Go.”  We want the world to know that UC Davis is moving forward over the next decade with confidence and innovation like never before.  I’ve asked people to consider a few key questions.  If you could imagine a UC Davis 10 years from now, what would that look like?  Who would you want us to be? How would we get there?

Some early ideas I’ve heard focus on enhancing our research and teaching excellence and creating a more inclusive and diverse campus community.  I’ve heard thoughts about enhancing our ties with neighboring communities. I hope you’ll also share some of your thoughts with me today. We’ll draft the plan this spring, with a goal of releasing the final version in July. I believe strongly that UC Davis is entering its brightest chapter yet.  Increasingly, we’re supporting entrepreneurship in areas that are critical to the public good.  In the past fiscal year, 14 start-up companies were created by using technologies developed at UC Davis.  These included ventures related to cancer therapies, genetics, sensor technology, food waste and much more.

We’re full of ideas and energy, and we want to see how we can create valuable relationships throughout the region––and the world–– in hopes of building a better tomorrow. I want to thank you again for inviting me here. UC Davis and Solano County have a mutual interest in our region’s growth.  By communicating and working together we can better leverage our investments as the regions grows.