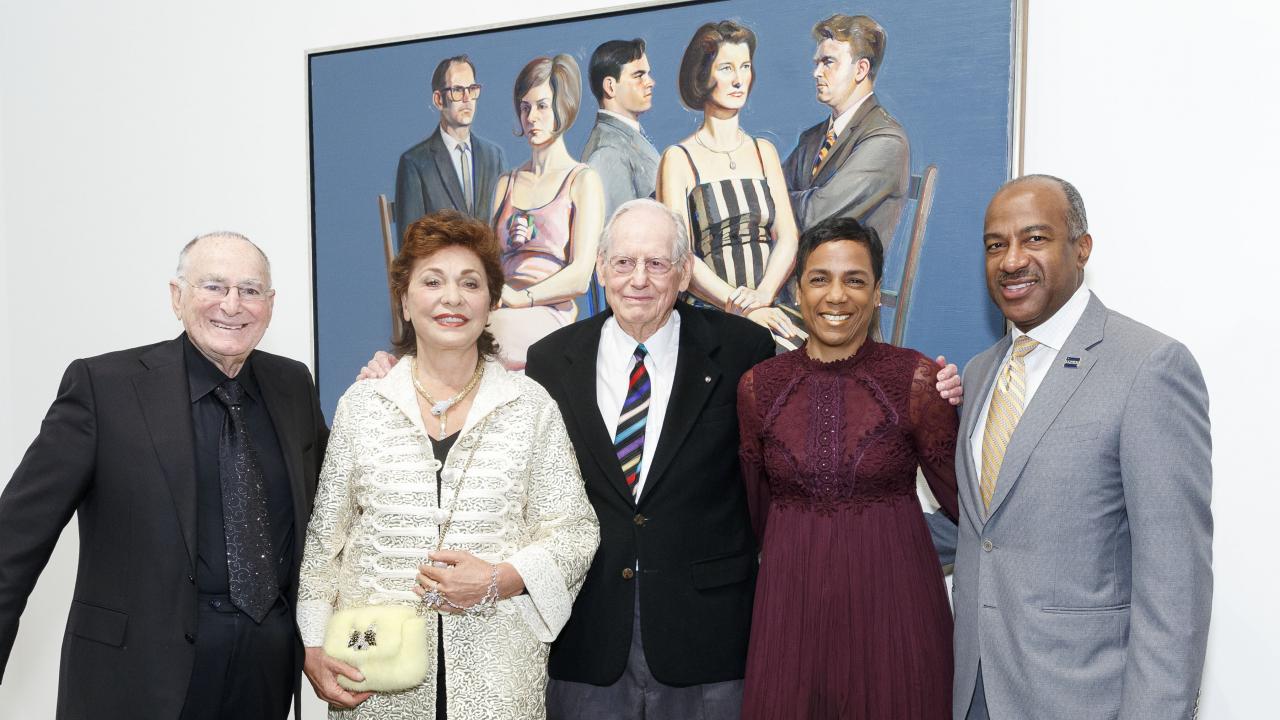 It’s a great pleasure to be here, not only to celebrate such a defining exhibit, but also to pay tribute to a true UC Davis icon, Wayne Thiebaud.

I’ve spent a lot of time traveling around California and the country since I became chancellor in August.  I’ve met with alumni, donors and so many other UC Davis friends, and I always want to know what gets them excited about the university.  I hear frequently how impressed everyone is by this museum and the role it plays in preserving UC Davis’ artistic legacy.

In particular, I hear the name “Wayne Thiebaud” come up often as a point of pride.  He personifies the impact and excellence that UC Davis signifies in the world of modern art.  Wayne’s legacy has enticed generations of art students to enroll here and build on our deep tradition of artistry. I’ve often said that UC Davis is like a sleeping giant, a powerful institution that has yet to show the full extent of its capabilities.  Well, Wayne Thiebaud is our giant, and the world knows how tall he truly stands. These beautiful, career-defining works are a reminder of why he’s collected by the world’s greatest museums, like the Smithsonian and the San Francisco Museum of Modern Art.

Now, my background is more in engineering than art appreciation, but it’s clear to me that Wayne Thiebaud is a masterful painter.  I say this because he creates oil paintings that look good enough to eat.  It’s a good thing we were served dessert before the tour.  Every time I see “Bakery Counter,” I almost want to dip my finger in the cake frosting and take a lick.  I know our museum visitors are in for a real treat to see this work up close.

But for all his accomplishments on canvas, Wayne is an educator first.  Wayne teaches us to take the time to pay attention, to see our world in a more textural light. As a longtime UC Davis art professor, he had a profound impact on generations of student artists.  Along with teaching the finer points of painting, Wayne encouraged his students to challenge their own preconceptions and pursue a unique point of view.  Many of his  students went on to earn their own acclaim – and how could they not, having been mentees of a true master?

Tonight is all about celebrating the man himself and his works during a pivotal moment in his career.

Preparations for the opening this exhibit have created quite a buzz around campus and the surrounding art community as well. I hope you all had a chance to see the UC Davis video of museum staff unpacking Wayne’s “Bakery Counter” painting from its giant shipping crate.  Their sense of awe and impeccable care in unveiling this gem made me think of Indiana Jones uncovering the lost ark. We’re so fortunate to be connected to a world-renown artist like Wayne Thiebaud and have the opportunity to showcase his work right on our campus.

Our Manetti Shrem museum is just over a year old and it has already become a defining feature of UC Davis.  It’s one of the first buildings people see as they enter our campus Gateway, and it immediately conveys the creativity and progressive spirit we embrace at UC Davis.  And who can resist banging that giant gong outside? But Manetti Shrem is more than a landmark.  The museum also cements UC Davis’ rich artistic legacy while showcasing a new generation of artists with diverse worldviews and sensibilities.

UC Davis has no shortage of acclaim for its breakthroughs in science, technology and engineering.  There’s no denying these accolades.  But we’re also a thriving hub of creativity and artistic expression.

Along with Wayne, I’m thinking of such pioneering art faculty as Robert Arneson and Roy De Forest, who were key figures in the “Funk Art” movement of the 1960s.  For this chancellor, any place that’s known for “funk” is great by me. But, more importantly, these artists combined a sense of quirkiness with master craftsmanship, like Arneson’s “Egghead” sculptures around campus, which set a whimsical tone for UC Davis to this day.

I’m also inspired by the museum’s commitment to inclusion. By inclusion, I mean that Manetti Shrem is not the Arts Department’s museum.  It is a UC Davis museum.  It is a spectacular public forum for our entire university community to share and display their creativity, their ingenuity, their novel ideas and their innovations.

This museum gives our students, scholars and researchers an entirely new setting for presentations and public engagement, whether it’s about compositional sketches, composing music –– or composting.

I truly appreciate that the museum is free to all visitors.  There’s no cultural snobbery here, just a welcome mat to all curious minds in search of beauty and truth in art.  It’s no wonder the museum saw 70,000 visitors during its first year. I also appreciate how the museum engages with our student community.  This is a teaching museum that also provides job opportunities for those exploring a career in the arts.  This is also a venue for their enjoyment.  Students flocked to the museum a year ago when it hosted a late-night pizza party and art celebration just for them.

I’m also struck by the diversity of artists who’ve been on display, including works that have referenced Mexico City, the Black Panthers in Oakland and even a Chinese beekeeper.  The museum staff have done a fantastic job of keeping their pulse on emerging artists from all over the world and showcasing these works for all. After such a successful first year, the Wayne Thiebaud exhibit is icing on the cake –– pun intended.

I want to thank the museum donors, board members and staff for bringing this amazing UC Davis institution to life.  Special gratitude goes to Rachel Teagle for steering the museum and setting its tone so well in its first year. And, of course, none of this would be possible without the incredible generosity of Jan Shrem and Maria Manetti Shrem, who are here with us now.  Thank you for your philanthropy and providing a gift of art that will endure for generations.

Let’s give a round of applause to them, and all the museum staff and supporters for making this such a fantastic first year.

Once again, I’d like to thank Wayne Thiebaud for being such an important part of the UC Davis story.  The artistic spirit that you generated as a professor still resonates today, and I want to congratulate you on a body of work that continues to inspire all of us.  We couldn’t be prouder to showcase your work in this wonderful exhibition.